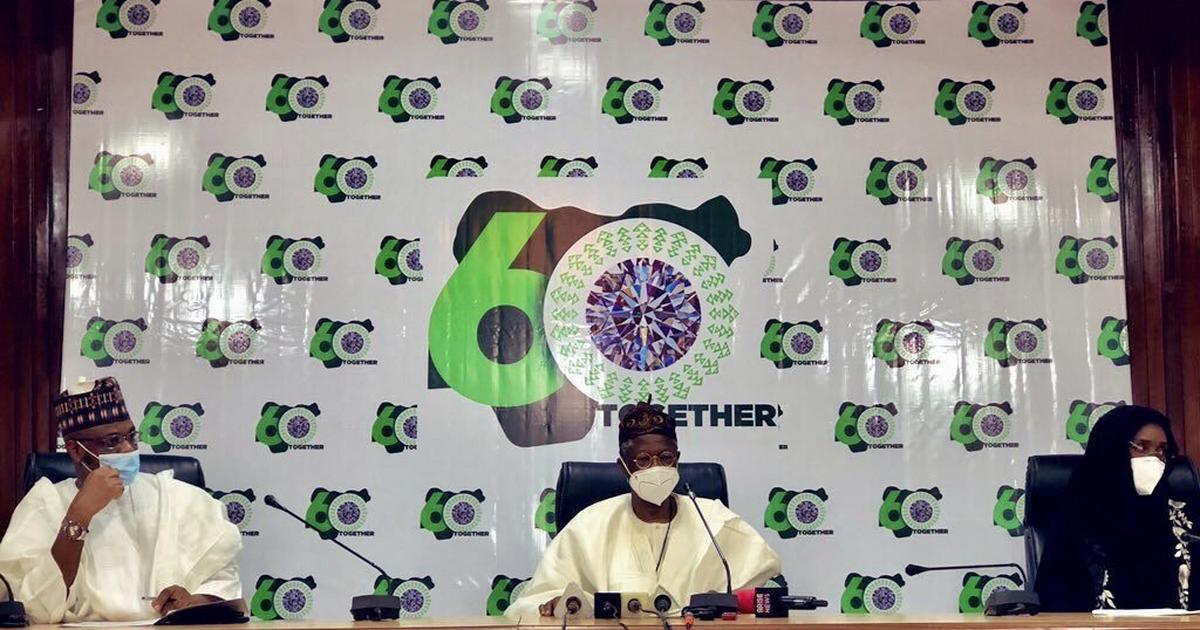 The News Agency of Nigeria (NAN), reports the Ministers of Communication and Digital Economy, Dr Isa Pantami, Humanitarian Affairs, Disaster Management and Social Development, Hajiya Sadiya Farouq were in attendance at the event.

“For a country that has gone through a bitter internal civil war, years of political crisis, daunting security challenges, including religious and ethnic crisis, our unity and our resilience (which by the way is what diamond represents) are worth celebrating.

“Also, in certain cultures, the age of 60 is seen as the beginning of a new cycle of life, and is usually well marked.

“For Nigeria as a country, the administration of President Muhammadu Buhari offers a new beginning.

“The administration is working assiduously to build a new Nigeria, laying the building blocks for industrial and technological development by building massive infrastructures in the areas of power, roads, bridges, rail and developing human capital.

“The administration is also fighting corruption, tackling insecurity and diversifying the economy by leveraging on ICT, Creative Industry, agriculture and mining, among others,” the minister said.

Mohammed corroborated Buhari’s pronouncement that the 60th independence anniversary will be low-key because of the COVID-19 pandemic.

He stressed that the pomp and pageantry associated with similar celebration will be largely missing.

The minister, however, said that the anniversary will be celebrated for a whole year, ending on Sept. 30, 2021.

“This does not mean there will be daily activities between now and Sept. 30, 2021, but that there will be staggered events during that period,” he said.

Mohammed said that the theme of the anniversary, “‘Together’, and the logo, already launched by the President, were aimed at keeping the country united and helping it to forge ahead

He said the activities for the celebration will commence on Friday, Sept. 25, with a public lecture at the National Mosque Conference Hall, Abuja at 10.00a.m. and will be followed by Special Juma’at Prayers at the Mosque at 1 p.m.

The minister said there will be an Inter-denominational Church Service on Sunday, Sept. 27 at the National Christian Centre, Abuja at 3p.m.

He said Nigerians can join the Church service virtually by logging on to the YouTube Channel of the OSGF at OFFICIALOSGFNG.

Mohammed said there will be a launch of the National Ethics and Integrity Policy as well as Integrity Award by the President to commemorate the 20th anniversary of Independent Corrupt Practices and other Related Offences Commission (ICPC).

He said the launch and the award will hold on Monday, Sept. 28 at the State House, Presidential Villa, Abuja at 10.00am.

The minister also said that a Historical Exhibition would be held on same day at the National Press Centre, Radio House, Abuja at 3p.m.

He said there would be a Presidential Broadcast on Thursday Oct. 1, as well as a Guard of Honour/Anniversary Parade at Eagles Square starting at 10.a.m.

Mohammed said attendance at all the events will be strictly by invitation, and all COVID-19 protocols will be observed at the various venues.

He, however, said that the media will have free access to the events that were open, like the Juma’at and Church services while the events slated for the Presidential Villa will be covered by the accredited State House media.

The minister wished all Nigerians a happy 60th independence anniversary.