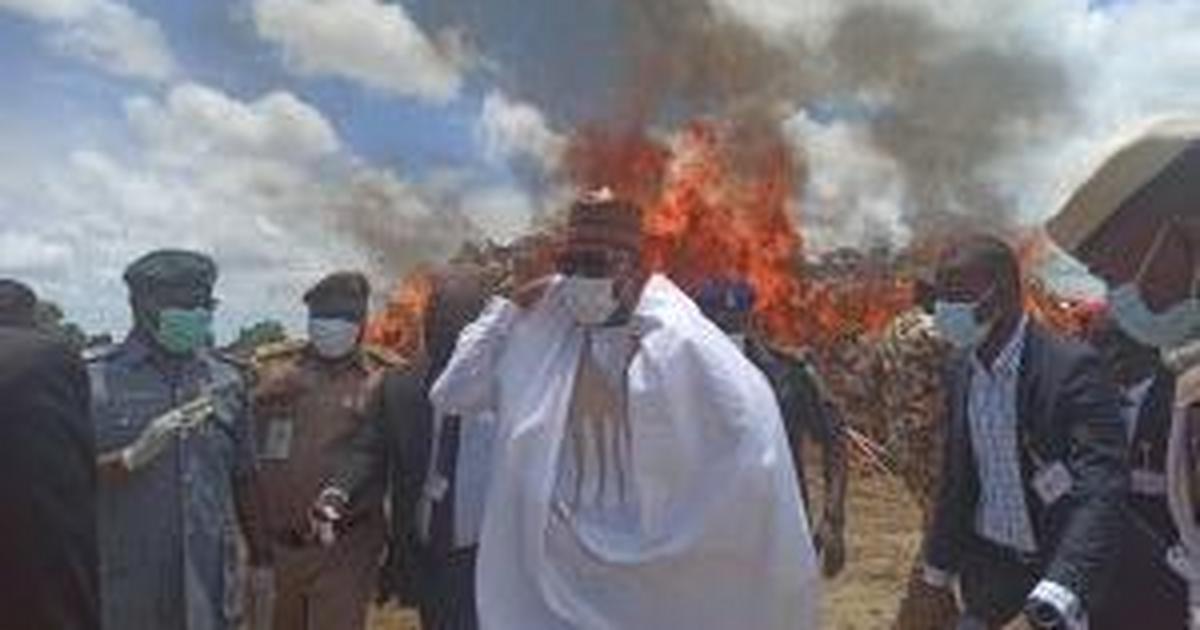 Mustapha said that the drug situation of the state was compounded by its proximity to the neighbouring countries of Sahel comprising of Niger, Chad and Cameroon, due to its porous borders.

He said that the symbolic event was significant to ensure that all seized drugs are permanently out of circulation and stopped from doing any further harm to the society.

“The Act establishing drug agency demands that an order must be granted by a Federal High Court which enables the agency to destroy publicly all the drug seizure cases that had been concluded.

“Following the court order, we are gathered to destroy a gross drug of 19.234.58 kilogramme, made up of cannabis sativa, and other variety of psychotropic substances.”

Mustapha said that the Borno Command of the NDLEA had recently intercepted and seized about 8 tonnes of cannabis in the Maiduguri Metropolis.

He lamented that the number of drugs seizures, arrest and conviction of drug dealers in the state, validated the position of hard drugs as a conflict stimulator that fuels, violent crimes, cultism in campuses and even domestic violence.

The Chairman said that the menace of the drug abuse in the northeast was a source of great concern in view of its current status of insecurity with its attendance dislocation of the living condition of the people.

“Currently, the vulnerable groups that had expanded include; teenage girls, young women and even old married women who are ordinarily mothers of our children that are expected to be the custodians of nurturing of our children into responsible adult.”

He lamented that over 4.2 million Nigerians abused all forms of psychotropic substances.

“It is for this reasons that the federal government is focusing on a new drug programme on the New National Security Strategy as part of the efforts to forestall the menace of insecurity confronting the country,” he said.

According to him, New Policy Initiatives are underway to ensure that the country overcome the problems of illicit trafficking and drug abuse.

“As an extension of the proposed Drugs Integrity Test Policy in the public service, the NDLEA is also considering partnering with religious leaders to make drug test a prerequisite for marriage in Churches and Mosques just as the case of HIV/AIDS and genotype test.

“We can no longer remain indifferent to the problems and refused to take responsibility in an effort to control drugs, we must come to term that drugs issue is a shared responsibility for all in the society.

“Government at all levels, community and religious leaders, parents, social workers, the media, youth organisations and policy makers should see it as a point of duty to come together and identify with our office efforts of combating drug abuse.”

The Chairman commended Gov. Babagana Zulum for his support to the state command especially in the supply of patrol vehicles and renovation of staff quarters.

He also lauded the prompt response of sister agencies to the event, adding that it was a collective resolve to tackle head on the menace of drug abuse and illicit drug trafficking that was ravaging the society.

In his remarks, Zulum said that the large quantity of drug seized by the agency was a matter of great concern.

Zulum recalled that recent media report has shown that Kano, Kaduna, Borno and Niger were some of the states with highest numbers of cases of drug abuse in the country.

He said that some of the common illicit substances being abused in Northern Nigeria include; Cannabis Sativa, Benylin with Codeine and Tramadol among others.

He said that more disturbing was the numbers of students in secondary schools and tertiary institutions who take these illicit drugs.

He said: “These are our children and future leader of our great country. Urgent steps must be taken to save the future of our state and safeguard our children to become meaningful individuals in the society.”

“The second vices was not limited to cultism, racketeering, armed robbery as well as the current insurgency that we are facing. The minds of youths under the influence of modified drugs can easily be manipulated by adult to achieve any selfish purpose.

Zulum appealed to the NDLEA to continue to work with other agencies involved in the regulations, manufacturing, importation and distribution of drugs in Nigeria.

The News Agency of Nigeria (NAN) reports that men of the Nigeria Customs Service, Nigeria Immigration Service, Nigeria Army, Fire Brigade and Nigeria Police were on ground during the burning of the drugs.