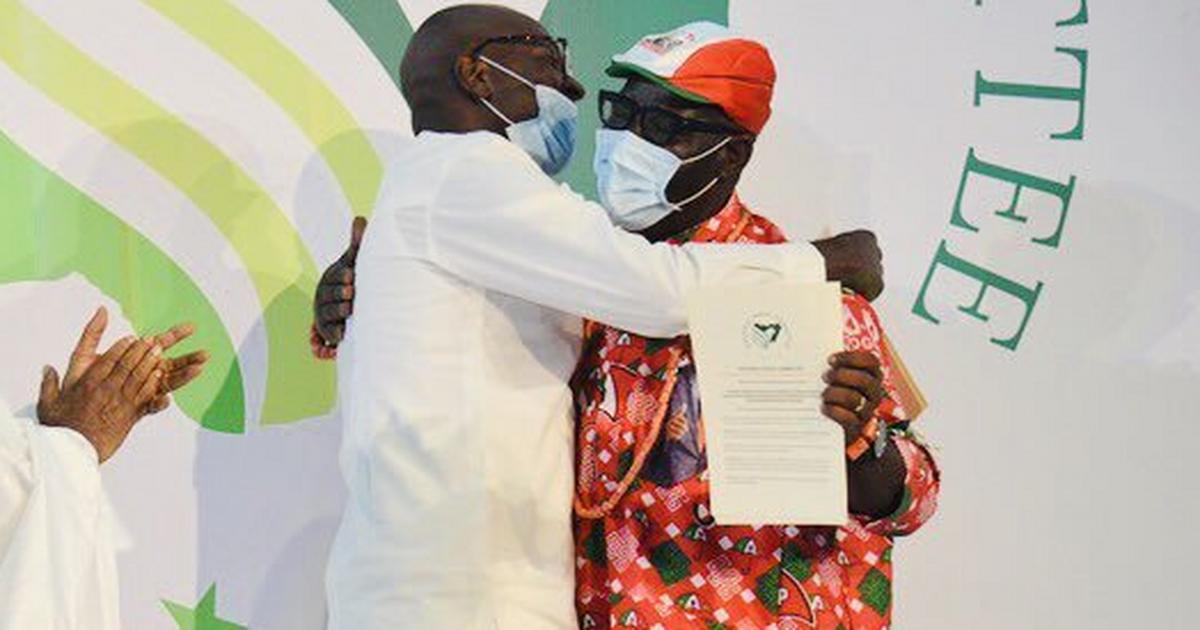 Gen. Abdulsalam Abubakar (rtd.), the Chairman of the National Peace Committee (NPC) and former Head of State, said at the occasion that Edo deserved peace.

He said, “As you are aware, since 1999, every election in Nigeria has been conducted with various degree of violence.

“The tension and anxiety associated with election necessitated the setting up of the NPC who is to support peaceful election process and enthrone culture of peace.

“The gubernatorial election in Edo state is only a few days away and we want peace during and after the election.

“We want to see Nigeria as a place where people come out peacefully during election and cast their votes without deprivation, intimidation and coercion.”

According to him, “The NPC is in Edo today to support this process and not just signing the peace accord by all candidates but to encourage you all to accept the result no matter the outcome.”

The Chairman commended the Benin Monarch for the role he played in bringing peace to Edo.

“By signing this peace accord today, you are committing yourselves to ensure an enduring peace in Nigeria and Edo State before, during and after the election.

“We have been given assurances by the INEC Chairman who told us that they were ready with all the necessary logistics to conduct free and fair election.

“So, the rest is left for you and the voters to do the right thing by desisting from selling your votes, vote buying, selling your right, conscience and freedom,” he added.

He called on all stakeholders to use the Edo election as a test for future elections in the country.

Governor Godwin Obaseki, the Peoples Democratic Party (PDP) governorship candidate, said shortly after signing the peace accord, that he was fully committed to ensuring that the election was violence free.

“In addition to being a candidate, I am the Chief Security Officer of the state. I have no choice therefore, than to state publicly, once again, that we are committed to peace in our dear state.

“Let me appeal to this national peace committee to extend same to some other political actors in the state who have influence in the political space,” Obaseki said.

The governor urged the peace committee to ensure that the political actors, not only signed the accord, but to persuade them to see the need to ensure peace in the state.

On his part, the All Progressive Congress (APC) candidate, Osagie Ize-iyamu, promised to talk to his supporters to conduct themselves in a manner to achieve peaceful poll.

“We are grateful to the peace committee, INEC and the Police. We are also grateful to the Oba of Benin because, what we are witnessing today was actually initiated few weeks ago by the Oba,” he said.

The Oba of Benin, Oba Ewuare II, thanked President Muhammadu Buhari and members of the NPC for their efforts to ensure a peaceful poll in Edo.

The Oba, represented by the Esogban of Benin, Chief David Edebiri, appealed to the Edo people to shun violence during the exercise.

Earlier, the Chairman of INEC, Mahmood Yakubu, said the commission was fully prepared for the election, adding that all arrangements for the poll had been concluded.

The Bishop of the Catholic Diocese of Sokoto, Most. Rev. Matthew Kukah, the co-convener of the event, urged the candidates not to see the signing of the accord as a mere ceremony, but to ensure peace.