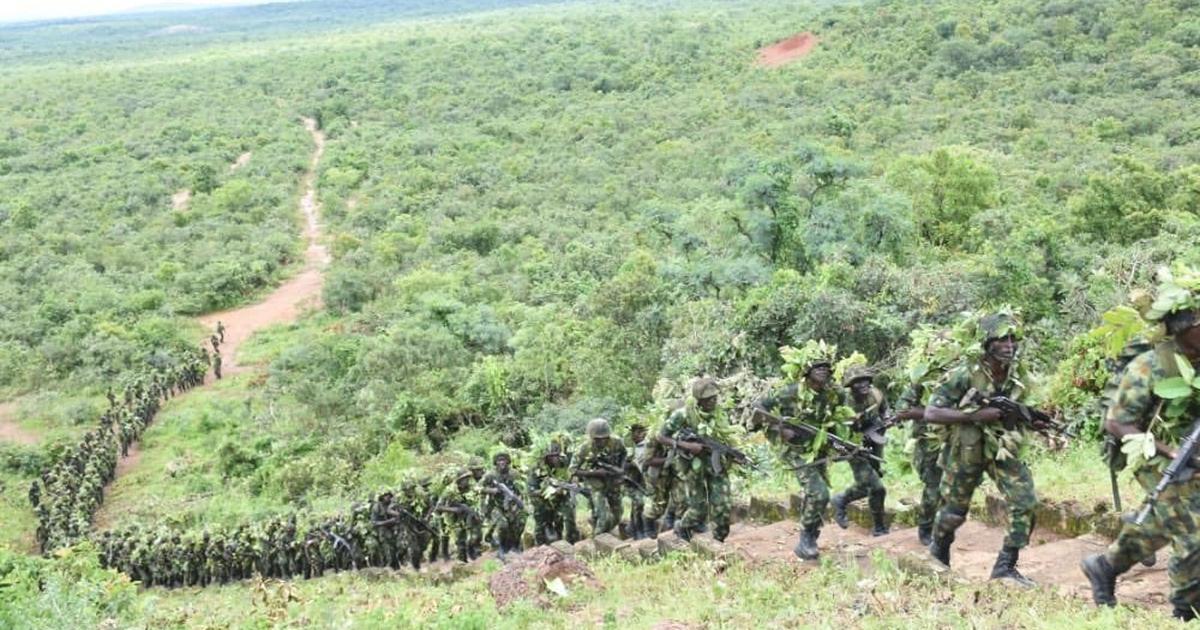 Enenche said the troops had recorded appreciable successes within the week, adding that some the terrorists arrested also included their family members with caches of arms and ammunition.

He explained that the troops had on Sept. 10 in conjunction with Civilian JTF engaged the terrorists at Kassa Kura in Maiduguri Town killing two terrorists during the encounter.

According to him, troops conducted ambush operations and eliminated three BHT/ISWAP elements recovering of large cache of arms and ammunition at Nguro Soye village of Bama Local Government Area and Dalori Gari in Maiduguri.

The coordinator also disclosed that the troops had on Sept. 11, killed five terrorists due to superior firepower while others fled with various degrees of gunshot wounds.

He further disclosed that troops in conjunction with local vigilantes had on Sept. 14, killed four BHT/ISWAP fighters and arrested seven at Gashua Local Government Area of Yobe.

This, according to him is in addition to three others arrested on Sept. 13 at the College of Agriculture in Gujba Local Government Area of Yobe.

“It is also worthy to mention that the wife and son of one of BHT’s high profile member, Abdulrahman Abdullahi had been earlier arrested by troops in Madagali Local Government Area of Adamawa State on Sept 7.

“Gleaning from the records of these operations, there is no gaining saying that the Armed Forces of Nigeria and other security operatives are resolute in their determination to end the insurgency and achieve sustainable peace in the North East zone of the Country,” he said.

In the North Central, Enenche assured that the military would end the activities of DarusSalam terrorists, adding that the recent arrest of its members and release of hostages in Kogi and Nasarawa states was a major breakthrough.

He said that the various military operations in Babies, Taraba and Nasarawa states had continued to record successes, adding that some members of the late Gana militia groups were recently arrested from their camp.

According to him, troops of operation Safe Haven had between Sept. 13 and Sept. 15 raided hideouts of suspected criminals within Jos North Local Government Area of Plateau State.

“A total of 25 suspects were apprehended while one locally fabricated pistol loaded with one round of 9mm ammunition was recovered during the course of the operation,” he said.

In North West, Enenche said the troops of Operations Hadarin Daji and Sahel Sanity had continued to dominate the zone leading to killing of several bandits and arrest of some and their collaborators in Katsina, Sokoto and Zamfara states within the period.

He added that the air component had also launched several airstrikes on some identified bandits’ camps in forest killing many bandits and destroyed their hideouts.

“The Military High Command commends all the gallant troops of the Armed Forces and personnel of other security agencies involved in various operations across the country for their commitment, determination and dedication.

“They are equally encouraged to remain firm and decisive in curtailing the activities of all criminal elements in the country.

“Members of the general public are hereby assured that the Armed Forces of Nigeria working with other security agencies will continue to tackle the security challenges and will ensure that normalcy is attained in all the geo-political zones of the Country.

“However their support is highly solicited in the area of providing credible information to assist our operations,” he said.